skip to main | skip to sidebar

After a hectic six months, I am determined to focus on writing and research for a couple of books this year. I suppose it is a new year's resolution of sorts though in general I don't make resolutions.

In order to focus on these projects, I will be taking a hiatus from blogging. I hope you will keep the blog bookmarked for some of the recipes I've included which are generally my favorites.

Gnocchi with watercress and bacon

I had a handful of watercress left over from the watercress soup, and I found a recipe for a sauce of watercress, garlic, red pepper flakes,tomato, olive oil, white wine and pancetta (optional for vegetarian) to serve with potato gnocchi. It turned out so good that I forgot to put the bacon (I had some on hand and substituted it for the pancetta) in it until I'd eaten half of it! I also didn't add any Parmesan, but forgoing the Parmesan meant that it required a little more salt. I used tomatoes from my friend's garden that I froze back in August. 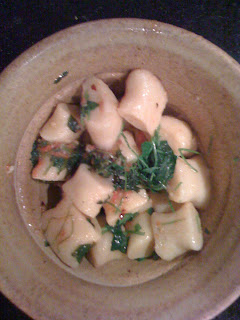 The recipe calls for store bought gnocchi. I'm sure that works well if you are in a hurry, but I figured I should do something productive on a Sunday afternoon besides napping. I made the gnocchi with some potatoes in my cupboard that were beginning to sprout so they had to be used. I found a totally easy recipe in Cooks' Illustrated.

Posted by K No comments:

I picked up a bunch of watercress somewhere with the plan to make watercress soup. When I lived in France I ate a lot of watercress soup. It's made with potatos to it is a thick soup with a nice peppery kick from the cress. I didn't know what watercress actually is so I looked it up on Wikipedia and found an interesting article. It is related to mustard and is a member of the cabbage family.

Recipe:
4 peeled and sliced potatoes
3 to 4 leeks peeled of the outer leaves and sliced (white part and tender green part)
1 T (yes, a tablespoon) salt
3 T butter
2 quarts of water (or stock or a mixture of stock and water)
A large handful of watercress

Put the water in a large pot. Add potatoes and leeks and salt. Simmer for 45 minutes. Add the cress. Simmer for 5 minutes. Puree the soup in a blender or food processor being careful not to burn yourself like I did. If you are using a blender, put a kitchen towel over the lid and hold it firmly. Pour soup back into pan. Add butter and stir until it melts. Season with black pepper and more salt if necessary.

Makes enough for a small army.
Posted by K No comments:

I hope everyone had a lovely Thanksgiving. I'm very underwhelmed by turkey. Next year I will try a turducken largely because I'd rather eat duck or chicken over turkey any day including Thanksgiving Day.

Side dishes are the best part of Thanksgiving. Someone gave me some sweet potatoes from a farm in Johnston County, but I ended up not using them until the weekend. I wanted to do something besides the usual sweet potato with marshmellow (yuck) or praline (yum) topping. One thing I remembered about visiting Australia years ago was that the Aussies seem to combine sweet potato and goat cheese fairly often. Since these are two of my favorite ingredients, I searched for a recipe and found this one from Epicurious.com which also features truffle oil. How could it possibly not taste good? It turned out very well indeed.

The tartness of the goat cheese complimented the sweetness of the potatoes and also made them very creamy. Truffle oil is truly a wonder. I put it on just about everything I can think of including frozen pizza and mashed white potatoes as well as pasta. It's outrageously expensive but it lasts a while since only a few drops are necessary for a nice truffly flavor.
Posted by K No comments: